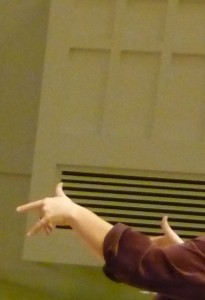 First, singing is a physical thing, like yoga. You can just show up late and jump in, if you’re really really good. But if you’re a newcomer it really helps to show up early for warm up – to loosen up those vocal muscles, yes. But also to shake off the day’s stress, literally, because it might be the first time you’ve stood all day. And to enjoy simple and sometimes silly scales sung in harmony, a wonderful thing even before sheet music is cracked open.

Also, it’s useful to show up early, because that’s when everyone is exactly where they’re supposed to be. Unlike say, the first time, when I was totally late and therefore had no idea where anyone was – and the only reason why the director was no where to be found. She’d already auditioned everyone and was taking a quick breath before the choir warmed up, doing a newbie a humongous favor by taking an extra few minutes. And because I was boorish enough to suggest otherwise, even inadvertently – I’m sorry, Jen, and thank you! 🙂

Second, a choir really is embracing and forgiving. Or perhaps it’s just this one, I wouldn’t know. Either way, I’m grateful. Because it’s not the horribly disruptive thing I thought it would be if I hit an off note. (Or, ahem, seven.) That’s not how it seems for the director, the accompanist, or the audience. They’re listening at the “end of the funnel,” as Jen puts it. The point was driven home again in second sopranoville when one of us stepped out briefly, and upon returning, said, “That sounds really good!”

At the end of the funnel, you hear a whole, a blend. And it is lovely.